Opening the season and running from June 8th to the 19th will be the hilarious comedy, DECEIVING GRANNY, written by Artistic Director, Michael Taylor. A married couple end up in hot water when they stretch the truth to the breaking point in an attempt to inherit a fortune from a grandmother neither has ever met.

The second show will be MURDERED TO DEATH, a comical spoof of the Agatha Christie “whodunit” genre of plays and movies. Murdered to Death will run from June 22nd until July 2nd. 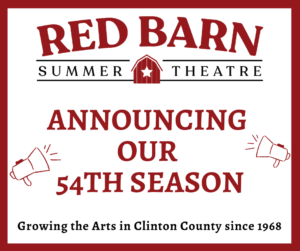 All shows begin at 7:30 p.m., with the exception of matinee performances.

Ticket brochures will be mailed in April and patrons can order their tickets immediately by mailing their ticket order form to our post office box. On-line ticketing begins May 8th, and the box office will open for the season June 1st at 5:00 pm and patrons can then order tickets in person or by phone.

Community Outreach and Business Manager, Bethany Sheets, says, “Last summer was a big season for the Red Barn! After being closed in 2020 because of the pandemic, we were so eager to roll out the changes and updates that went on behind the scenes while our doors were closed.”

“House after house was sold out last year,” Sheets continues, “and we were able to supply some much-needed laughter and camaraderie to our audiences. We also brought in musicians for pre-show entertainment, with the addition of a small outdoor stage and picnic tables where patrons could enjoy the warm, summer breeze and a glass of wine or cold beer from The Cellar – which was also new. We’re looking forward to doing it all again this summer!”

The Red Barn Summer Theatre is located at 2120 East County Road, 150 South in Frankfort, Indiana. The theatre was founded by Martin and Carol Ann Henderson in 1968 and moved to its present location on the former Joe and Erma Maish farm in 1973.