Frankfort’s Red Barn Summer Theatre has opened a new picnic area this summer. Partnering with Blackhawk Winery of Sheridan, the Barn’s new outdoor area is now serving beer and wine on Fridays and Saturdays. In addition, local musicians have been invited to perform on the lawn prior to the stage performances. As the first production of this year, “Who’s In Bed With The Butler,” continues its successful run, two musicians will entertain audiences this week on the beautiful grounds of the theatre.

On Thursday, June 17, starting at 6:15, the Barn is proud to present country artist Joey Doss. A North Carolina native, Joey has played over 1,000 shows and logged hundreds of miles on the road, appearing at venues like The Hard Rock Café and The Roof On Broadway in Nashville. 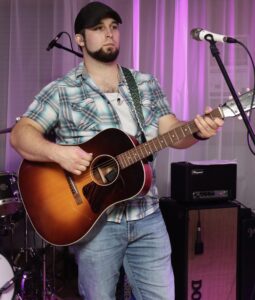 Joey has shared the stage with many talented artists including Brothers Osborne, Lauren Alaina and Florida Georgia Line. Joey currently has three albums available, his most recent is his first solo record recorded in 2017 at The Rubber Room in Chapel Hill, NC. When Joey is not playing solo gigs, he performs with the band “Beyond Carolina.” 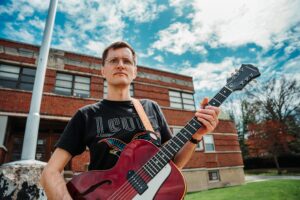 Rick became interested in music by listening to his dad’s favorite records—CCR, The Beach Boys and John Denver. Rick began playing music at the age of 12 and for years afterwards was involved in a series of bands. His last band project lasted for ten years and was called The Clutter. Now Rick is taking it back to where it all began, playing his childhood favorites mixed in with his own original, vintage style pop songs.

Indianapolis 80s duo “Dad Jeans” kicked off the season with an exciting performance on Opening Night. Musicians that will be appearing on future dates include keyboardist/vocalist Jeff Bowen, Gibson Wells, Hunter Wainscott and Bitter Oak Revival.

The lawn shows this week with Joey Doss on Thursday and Rick DeSutter on Saturday begin at 6:15. The Red Barn invites everyone to come early and enjoy some great music in the shade of the old Barn. The zany comedy “Who’s In Bed With The Butler” continues this week with shows Wednesday through Saturday at 7:30 and Sunday at 2pm.