You Are Here:Home>RadioMom Local News>Repeat Drug Dealer Sentenced To 22 Years In Prison 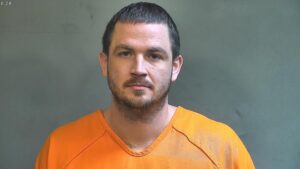 On January 4, 2023, Drew D. Shepherd, 33, of Lebanon was sentenced to 22 years at the Indiana Department of Corrections on two counts of Dealing Methamphetamine as a level 3 felony by the Honorable John G Baker. After a two day trial on October 6, 2022, a Boone County jury found Shepherd guilty to all of the presented charges – 2 counts of Dealing in Methamphetamine as a level 3.
The trial proceeded without the Defendant present as he failed to appear for the jury trial as instructed by the Court. The Defendant was notified in person at a previous hearing of the jury trial date. A jury trial without the defendant present is known as a “trial in absentia.” While uncommon, a trial in absentia has all the procedural safeguards of a “regular” trial where the defendant is present – including a defense attorney who is able to present a case on behalf of the defendant. This is the second time in as many years that the Boone County Prosecutor’s Office has had to try a jury trial in absentia.
The charges stem from acts committed by Shepherd on or about October 8 and 22, 2018. Through an investigation conducted by the Hamilton/Boone County Drug Task Force in October of 2018, Shepherd delivered methamphetamine to a confidential informant on two separate occasions. Drew Shepherd was previously convicted on October 19, 2010 for Conspiracy to Commit Dealing in a Schedule 1 Controlled Substance as a B felony. Additionally, Shepherd has a pending Level 2 felony Dealing in Methamphetamine case in Newton County filed in September of 2022
The prosecution team was led by Narcotics Prosecutor Conrad Schrock, co-counsel Major Felony Prosecutor Brent Wilson and Lebanon Police Detective Eric Adams assigned to the Hamilton/Boone County Drug Task Force.