You Are Here:Home>Obituaries>Rev. Raymond L. King 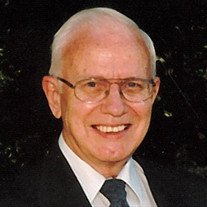 Rev. Raymond L. King, 91, formally of Lebanon, passed away on Wednesday, July 24, 2019 at Hoosier Village Healthcare in Indianapolis. He was born on August 15, 1927 in Columbus, Indiana, the son of the late Rev. George T. and Beulah (Adams) King.

He served in the ministry for many American Baptist churches. From 1971-1990 Ray and his family lived in Lebanon, where Rev. King was pastor of the First Baptist Church. Before that, he was pastor for churches in Mill Creek, Liberty Center, Jeffersonville, and Valparaiso, Indiana, and Omaha, Nebraska. In retirement, Ray also assisted numerous churches throughout Indiana as interim pastor.

In retirement, he moved to Heritage Lake and wintered in Lake Placid, Florida for several years, then moved back to Indianapolis. Ray was a compassionate leader, dedicated to ministry and mission work, and devoted to his family and friends. He was also an excellent musician and pianist.

Funeral Services will be held at 1:00 p.m. on Tuesday, July 30, 2019 at the Chapel of Hoosier Village Retirement Center, 9875 Cherryleaf Drive, Indianapolis with Rev. Joseph Huse officiating.
Visitation will precede the funeral service, at the Chapel from 11:00 a.m. until 1:00 p.m.
Interment will follow services at Oak Hill Cemetery in Crawfordsville, Indiana.

In lieu of flowers, memorial donations may be made to the Retired Ministers & Missionaries Heritage of Sharing Fund, MMBB, 475 Riverside Drive, Suite 1700, New York, NY 10115. Please indicate the gift is in Rev. Ray King’s memory.