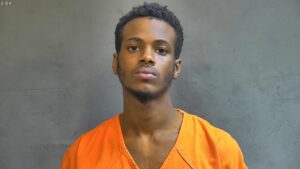 On Tuesday 3/22/2022, at approximately 5:45pm, Boone County Dispatch notified WMPD officers of a robbery at gunpoint that had just occurred in the area of Gordman Drive in Whitestown. The victim reported the suspects fled in a black Chevrolet Impala. Shortly after the dispatched call, WMPD Officers in the area located a black Chevrolet Impala, and upon attempting a traffic stop the vehicle
fled.
Following a short vehicle pursuit in a residential area, the vehicle became stuck in the mud and two suspects fled from the vehicle on foot. The initial pursuing WMPD Officer deployed his K9 partner, and successfully apprehended the passenger, resulting in a dog bite. The suspect was initially treated for injuries at the scene and was transported to a local area hospital for further evaluation.
Zionsville Police Officers joined WMPD in the foot pursuit, and assisted in apprehending the
suspected driver without injury or incident. Following a preliminary investigation, the passenger was identified as 18-year-old Jawaun D. Gordon of Indianapolis. The second suspect was identified as a 15-year-old juvenile male of Indianapolis whose name will not be disclosed. It was also determined that the suspect vehicle was confirmed stolen out of Indianapolis. Gordon is currently being held at the Boone County Jail pending recommended charges of Armed Robbery, Battery on a Public Safety Official, and both Class A Misdemeanor and Level 6 Felony Resisting Law Enforcement. The 15-year-old juvenile male is being held at the Johnson County
Juvenile Detention Center pending recommended charges of Armed Robbery, and both Class A Misdemeanor and Level 6 Felony Resisting Law Enforcement.
Assisting Agencies: Boone County Sheriff’s Office, Zionsville Police Department, Whitestown Fire
Department/EMS