You Are Here:Home>Obituaries>Robert L. “Pete” Irwin 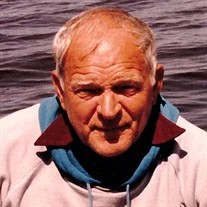 Robert L. “Pete” Irwin, 95, passed away Sunday, December 13, 2020 with family by his side in Westfield, Indiana. He was born on October 12, 1925, in Clarks Hill, Indiana, a son of the late Nettie (Baer) and James Irwin. He was also preceded in death by his wife, Marilyn J. Irwin.

Pete was a graduate of Bowers High School. He served his country honorably in the US Navy during WWII. Following the war, he graduated from Purdue University, through the GI Bill where he played football for the Boilermakers and earned a degree in education. He later received his masters degree from Butler University.

Pete was a member of the American Legion, Elks and VFW in Lebanon, Knightstown and Richmond. Pete enjoyed fishing and mushroom hunting. He was an avid sports fan, who especially loved the Purdue Boilermakers. But his true pride and joy was watching all his grandkids and great grandkids in their sporting activities.

In addition to his parents and wife, Pete was preceded in death by sisters, Maxine Irwin, Louise Irwin, Mary Knapp and Ada Haughs; one brother, Jim Irwin.