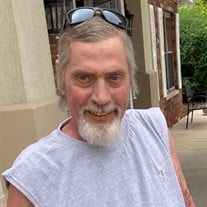 Robert Lester “Bob” Latham, Jr., 64, formerly of Jamestown, passed away at Riverwalk Village in Noblesville, Indiana on Monday, July 5, 2021. He was born in Indianapolis, Indiana on October 9, 1956; a son of the late Robert and Irma (Baker) Latham.

He was a 1975 graduate of Western Boone Jr. Sr. High School. He was married to Paula Latham; she preceded him in death in December 2005. Bob served his country honorably in both the U.S. Army and U.S. Navy.
Bob was a truck driver for many years. He enjoyed life and spending time with family, especially during the holidays.

In addition to his parents and wife, Bob was preceded in death by a sister, Cynthia L. Mitchell.

Visitation will be held from 12:00 noon until the time of service on Thursday at the funeral home in Lebanon. Interment will follow services at Lincoln Memory in Whitestown.

In lieu of flowers, memorials may be given to the Boone County Senior Services, 515 Crown Pointe Drive, Lebanon, Indiana 46052.