You Are Here:Home>Obituaries>Roberta B. Summers 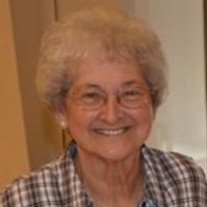 Mrs. Roberta B. Summers, 85, passed away on January 24, 2021 at Restoracy of Whitestown in Whitestown, Indiana. She was born on August 24, 1935, in Lebanon, Indiana; a daughter of the late Joseph C. and Gladys (Eaton) Corwin.

On June 14, 1958, she was married to Max E. Summers; he preceded her in death on December 5, 1996. Roberta and her family resided in Kirklin and Thorntown before moving to Lebanon.

Roberta received her GED in 1985. She worked at Western Electric in Indianapolis, Cigar Factory in Frankfort, The Globe Factory, and Witham Memorial Hospital in Lebanon, retiring in September 2000.

She was a member of Fairview Christian Church where she was a Sunday school teacher, a treasurer, and always enjoyed helping with church events. She was also a member of the Dover Dozen Homemaker’s Club. Roberta enjoyed taking care of her home and her family.

In addition to her parents and husband, Roberta was preceded in death by a son, Terry Summers, siblings: Mary Lewis, Mabel Saulsberry and Joseph Corwin, Jr.; and one great granddaughter, Sophie Judy.

Private Family Graveside Services will be held on Friday, January 29, 2021 at Hopewell Cemetery in Boone County. Myers Mortuary has been entrusted with her care.

Memorials may be given to the charity of the donor’s choice.