You Are Here:Home>Obituaries>Roscoe Jackson Perkins 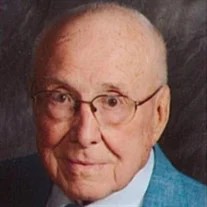 Roscoe Jackson Perkins, 91, passed away on Tuesday, October 13, 2020 at Homewood Health Campus in Lebanon, Indiana. He was born in Boone County on December 21, 1928; a son of the late Claude M. and Gladys E. (Froment) Perkins.

He had been a life resident of Boone County and a 1948 graduate of Lebanon High School.

Roscoe was married to Lucile “Lorraine” (Urban) Perkins in Boone County on May 23, 1953; she survives, and they shared 67 loving years together.

He was proud to have served seven years in the Indiana National Guard. Roscoe was a design draftsman for Commercial Filters in Lebanon for 42 years, ten of those years he was a welder.

He was a devoted secretary and treasurer at Browns Wonder Cemetery for thirty years and was a faithful member of New Brunswick Church in Lebanon.

Roscoe enjoyed bird watching and feeding the hummingbirds on his front porch. He will be fondly remembered for his love for family and his humble nature.

In addition to his parents, Roscoe was preceded in death by brothers, Elliott Perkins, Kenneth Perkins; sister, Fern Farrow and an infant sister, Josephine Perkins.

Funeral Services will be held at 10:30 a.m. on Tuesday, October 20 at the funeral home in Lebanon. Interment will follow services at Browns Wonder Cemetery in Lebanon.