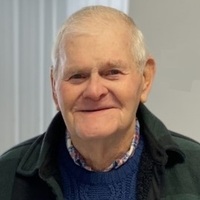 Ruddy Wayne Barrickman, 84, passed away on Monday, February 28, 2022, at Ascension St. Vincent Hospital in Indianapolis.   He was born in Lebanon, Indiana, on March 12, 1937, a son of the late Russell Barrickman and Pansy (Northcut) Barrickman.

On November 25, 1959, Ruddy married his high school sweetheart, Barbara Jane (Starkey) Barrickman.  They have shared 62 loving years together with whom they share 4 beautiful children.

Ruddy was a 1957 graduate of Perry Central High School.  During high school, Ruddy was a talented athlete and played basketball and baseball.  He was the leading scorer in his senior year in basketball sectionals.

Raised on a farm in Boone county, Ruddy was a farmer all his life.  He raised livestock and grew corn, soybeans and wheat.   He was always willing to lend a helping hand to other farmers in the area and put their needs above his own.   His most enduring gifts were his humble quiet nature and strong work ethic on the farm, which will be passed down through the generations.

He was a devoted husband, father, and grandfather, as well as a great friend to many farming families in the community.  Above all, Ruddy loved his grandchildren and was so very proud of all their accomplishments.  He enjoyed attending sporting events to watch his grandkids play.  He enjoyed drinking coffee with his friends at the Blue and White, attending farm machinery sells, working on tractors, gardening, and watching old western movies.  He enjoyed sitting in his lawn chair outside in the shade and looking out over his farm and waving to neighbors driving by.

In addition to his parents, Ruddy was preceded in death by his sister, Barbara Ann Barrickman, a daughter-in-law, Janet Barrickman and son-in-law, Ray Land.

Family and friends will gather Friday, March 4 for visitation from 4 p.m. until 8 p.m. in the Strawmyer & Drury Mortuary, 2400 N. Lebanon Street, Lebanon. Funeral service will be Saturday, March 5 at 2 p.m. with Rev. Richard Burdett officiating in the mortuary. Mr. Barrickman will be laid to rest in the Oak Hill Cemetery in Lebanon. Memorial contributions in his memory may be made to the American Heart Association or to the Boone County Cancer Society.