You Are Here:Home>Obituaries>Russell “Doc” Hardin 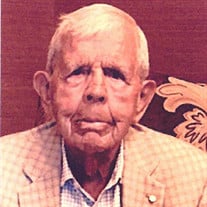 Long-time Lebanon, Indiana and Boynton Beach, Florida resident Dr. Russell Warren Hardin (“Doc” or “Russ” to friends and Dad, Grandpa, Great Grandpa, Cousin or Uncle to family) died on August 4, 2021. Russ was born on his parents’ family farm in Henry County, just outside of Knightstown, Indiana, on July 30, 1920. He was the second son of Fred Hardin and Mildred Stewart from whom he learned the importance of hard work, personal responsibility, Christianity, community service, family card games and Republican politics.

He grew up on the family farm, loved athletics and graduated from Knightstown High School in 1938. After graduation, he attended Purdue University where he met and married Pauline Guise (Peg) on April 11, 1943. He was an animal science major at Purdue, but his education was interrupted briefly by World War II, when he entered the U.S. Army Medical Corps and eventually reached Fort Bliss in El Paso, Texas in 1944. There he was tested for enrollment in the Army Specialized Training Program (ATSP) and was transferred to Kansas State University’s Doctor of Veterinary Medicine program, at a time when Kansas State was one of the few institutions offering this degree. While at Kansas State, Russ served in an ASTP unit, but was also a veterinary school student and decided to play football, which he did in 1944 and 1945. In 1945 he was captain of the KSU Wildcat team and earned All Big 8 recognition as a guard, while meeting the daily expectations of both his classes and the U.S. Army.

He graduated from Kansas State in January 1946, and moved to Lebanon, Indiana, with his wife Peg, who in July 1946 gave birth to daughter Judith Dianne (Judy). He immediately set up his veterinary practice, the Lebanon Veterinary Clinic, and embarked upon a career as a veterinarian, a community leader, a concerned parent, and an educational advocate. Five years later on February 19, 1951, Doc and Peg welcomed a second child, Eddy Russell (Ed), to their Lebanon family, an event that strengthened his family commitment to the community and its educational resources.

Russ began his veterinary practice when all practitioners were generalists—he treated all animals, large and small, at the clinic or on family farms. In the 1950s he traveled throughout Boone and nearby counties to help animals and their owners in times of crisis. While he eventually hired young veterinarians as assistants, he maintained a mixed practice. After Purdue created its Veterinary School, he took animals and tissue samples to West Lafayette for the latest diagnoses or procedures. He remembered that over his career he had taken three different sets of rabies vaccinations when they were painful and administered daily. He fondly recalled his oddest case, a sick kangaroo that showed up with its owner at the clinic one day. He told friends he’d never learned anything about kangaroos in Vet school, but treated it like other animals—a shot of penicillin. Under Republican governors Otis Bowen and Robert Orr, he served on the State Veterinary Exam Board, and often volunteered to serve as the veterinarian on duty at the Indiana State Fair.

Russ’ family worshipped weekly at the First Presbyterian Church in Lebanon, and he soon assumed leadership in the congregation, first as a deacon, then an elder. Even in retirement he remained active in his congregation in Lebanon, and seasonally in Boynton Beach’s Church of the Palms. In 1951, he joined the Lebanon Rotary Club, became its President in 1954-55, and attained thirty-five years of perfect attendance. He became a Paul Harris Fellow, as did his wife Peg, daughter Judy, son-in-law Ron, grandson Brian, and son Ed. His other community interests included the 4-H clubs of Boone County, the American Legion, the Masonic Lodge, the Elks Club, the United Fund of Boone County, the former Union Federal Savings and Loan Association, where he served on the Board of Directors, and Ulen Country Club, where he was the oldest member and long-time representative on the Board of Directors. His Republican community and state leadership led Governor Otis Bowen to appoint him to the Indiana Natural Resources Commission, and Lebanon recognized his community leadership when in 1993, the 4th of July Parade committee selected Russ and Peg as honorary marshals. A sports enthusiast throughout life, “Doc” was a regular golfer into his nineties and prided himself on golf scores that in later years were normally lower than his age. Friends will also remember him as a competitive card player who loved gin rummy and bridge.

He served his home community and state in various ways. He served terms on the Lebanon City Council and the Lebanon School Board during the building campaign that led to the new high school. He attended Lebanon football and basketball games regularly, and was especially proud of the LHS swimming pool. His involvement with the Lebanon schools led to his selection for membership on and then presidency of the Indiana State Board of Education. His interest in education extended to higher education, where he sponsored Boone County students in need of financial assistance, and remained a dedicated alumnus of both Purdue and Kansas State Universities. At the time of his death, Russ was the oldest living member of the Kansas State Wildcats football program, and had received repeated recognition for this special status at both homecomings and bowl games. In July 2017, Kansas State University’s College of Veterinary Medicine recognized him as the recipient of its Alumni Recognition Award. In earlier years he represented Purdue University’s Agricultural Alumni and its athletic booster club, the John Purdue Club, on university trustee boards. Purdue’s Alumni Association awarded him its Certificate of Distinction in 2018, and the Department of Animal Sciences awarded him a Purdue Lifetime Achievement Award the following year.

Dr. Hardin is survived by his beloved companion and caregiver Charlotte Long of Boynton Beach, Florida; his daughter Judy Brown and spouse Ron of San Marcos, Texas; their son Brian, spouse Stephanie and great-granddaughter Cambria of Metuchen, NJ; son Ed, spouse Nancy of Urbana, Ohio; and their sons John Hardin of Cincinnati, Ohio, and Paul, spouse Brittney and great-granddaughter Nora Ann of Delaware, Ohio and sister Helen Townsend of Hartford City, Indiana. All of his Townsend (Jay, Lisa, Mark, Steve and Allen) and Hardin (Tom, Joy and Peter) nieces and nephews are alive and now live across Indiana and the nation as do Charlotte’s son Andy and spouse Connie of Arlington, Virginia; Charlotte’s grandchildren Caitlin and spouse John, Michael, Nicholas, and Caroline, great-grandchildren Caroline and Roger, and Jean Green’s daughters Sue and husband Jim, Judy and husband Kyle and their families.

Visitation is planned from 4:00 to 7:00 p.m. on Friday, August 13, 2021, at Myers Mortuary, 1502 North Lebanon Street, in Lebanon, Indiana. Masonic services will be held at 7:00 p.m. Funeral services are planned for 10:30 a.m. on Saturday, August 14, at the funeral home. You are welcome to view the service live stream on Myers Mortuary’s Facebook page. Burial with military rites will take place at Oak Hill Cemetery in Lebanon.