You Are Here:Home>Obituaries>Saundra Sue Cook 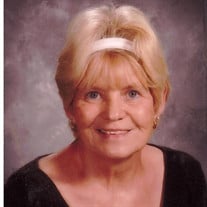 Saundra Sue Cook, 76, of Jamestown, Indiana, passed away early Saturday morning, May 29, 2021, at Witham Memorial Hospital in Lebanon. She was born on September 28, 1944, in Bonnie Blue, Virginia, to the late Ernest Homer and Kathryn Winifred (Mullins) Hall.

A longtime resident of Indiana, Sandy was a graduate of Arsenal Technical High School in Indianapolis.

On July 3, 1993, she married her longtime sweetheart, James Edward “Eddie” Cook, Jr. in Indianapolis; he survives. They had shared over 40 years together.

Sandy had worked for the Western Boone School Corporation as a custodian for thirteen years. After retirement she continued to work for the before and after school program (B.A.S.E.) at Granville Wells Elementary School.

Having had a strong faith, Sandy was a dedicated member of the Church of God of Prophecy in Jamestown. She enjoyed gardening and watching the hummingbirds in her yard. She had quite the collection of magazine subscriptions, reading each from cover to cover. Above all, she loved her family and was a devoted wife, mother, grandmother, and great grandmother.

In addition to her parents, Sandy was preceded in death by a brother, Kenneth Hall.

Visitation is planned from 11:00 a.m. to 1:00 p.m. on Friday, June 4, 2021, at Myers Mortuary, 1502 North Lebanon Street, in Lebanon, Indiana.
Funeral Services will begin at 1:00 p.m. with Pastor Bill Titara, officiating.
Boone County Crematory has been entrusted with her cremation arrangements following services.

Memorials may be directed to St. Jude’s Children’s Hospital in Sandy memory.