You Are Here:Home>Obituaries>Scott A. Jamison 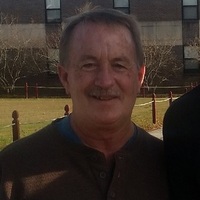 Mr. Scott A. Jamison, 56, of Lebanon, died Wednesday, May 25, 2022, at IU Health University Hospital in Indianapolis.

Scott was born Oct. 4, 1965, in Lebanon, a son of Patricia (Johnson) Jamison and the late Charles Leon “Duke” Jamison. He married Dawn Lime on Jun. 24, 1995, in the One-Way Christian Church. She survives.

Scott graduated from Lebanon High School with the class of 1985, where he set records running track. He was self-employed, working in glass installation. Scott was also a professional flat track racer. He was an avid gunsmith and enjoyed tooling around in the garage. Most importantly, he loved his boys.

Family and friends will gather Tuesday, May 31, for visitation from 12 p.m. until the time of the funeral service at 4 p.m. in the Strawmyer & Drury Mortuary, 2400 N. Lebanon Street, Lebanon. Scott will be laid to rest at Browns Wonder Cemetery in rural Lebanon.

Memorial contributions in his memory may be made to the Humane Society of Boone County, PO Box 708, Lebanon, IN 46052.