The Fourth Returns To Boone

The Fourth Returns To Boone 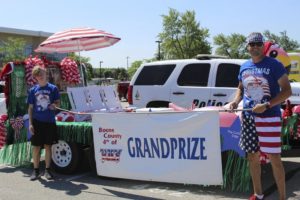 Thursday’s Lebanon Fourth of July parade featured 92 entries including golf carts, floats, tractors, and emergency vehicles.The grand prize went to the Heart of Lebanon. The grand prize was based on overall originality, beauty and theme and was $100. Their float sported the ‘Christmas in July’ theme. The float was decorated with red, green and white colors along with an inflatable flamingo, bench, leis, a sun umbrella and Santa. More details in the Lebanon Reporter.