Traffic Fatality On I 65

Traffic Fatality On I 65 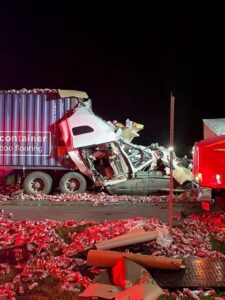 Sunday night, at approximately 9:30 PM, it was reported that there was a multi-vehicle accident in the area of the 149 mile-marker southbound of Interstate 65. Once first responders arrived on-scene, they found that there were four semi-tractor trailers and one passenger car involved in the accident. After further investigation it was found that the most rear semi-tractor trailer had failed to yield to slowing or stopped traffic and as a result it struck the other vehicles in the roadway. The driver of said semi-tractor trailer, Mr. Trever Perkins (30 yrs) of Indianapolis, IN, was pronounced deceased on scene due to the nature of his injuries from the accident. None of the other person(s) involved were injured.