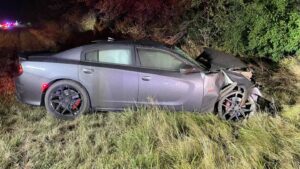 On August 29, 2021 at approximately 11:12pm, a Boone County Sheriff’s Office Deputy was traveling northbound on Interstate 65 at the 135-mile marker when a gray Dodge Charger passed it in the right lane at a high rate of speed. The deputy attempted to stop the vehicle and the driver refused. A pursuit ensued.
A Thorntown police officer deployed stop sticks at the 146-mile marker and the fleeing vehicle ran over the sticks. The vehicle continued northbound, with sparks coming from one of the wheels. The vehicle struck another vehicle, a white Toyota Scion, at the 157-mile marker in Clinton County. The vehicle that was struck rolled multiple times. The two occupants, from Tennessee, were
transported to a local hospital with minor injuries. The fleeing vehicle also rolled, and two occupants ran from the vehicle into a field. Deputies from BCSO and law enforcement agencies listed below searched for the occupants. One of the occupants, Shannon Lawson, 22, of Chicago Illinois, was located in Frankfort. After a medical clearance, he was transported to the Boone County Jail.
Preliminary charges include, but are not limited to, Resisting Law Enforcement. The other occupant has not been located at the time of this media release. It was later learned that the fleeing vehicle was reported stolen out of Georgia. Two handguns were found in the vehicle. One was reported stolen out of Illinois. The case remains under investigation.