You Are Here:Home>Obituaries>Virginia E. Nunnally 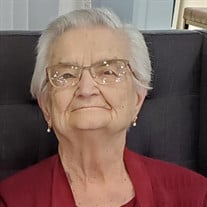 Mrs. Virginia E. Nunnally, 94, of Colfax, Indiana, passed away Monday morning, May 10, 2021 at Mulberry Health and Retirement Home. She was born in Monroe County, Indiana, on October 21, 1926, a daughter of the late Pikey and Susie (Miller) Freeman.

Virginia was a 1945 graduate of Spencer High School. She had worked for RCA in Bloomington as a production clerk.

She was a member of the Hills Baptist Church in Clinton County where she served as a ladies’ aide. Virginia was a devoted wife, mother, and grandmother who loved her family dearly.

In addition to her parents and her husband, Virginia was preceded in death by four brothers, Robert Freeman, David Freeman, Glenn Freeman and John Freeman; and one sister, Maxine Freeman.

Funeral Services are planned for 3:00 p.m. on Thursday, May 13, 2021 at Myers Mortuary in Lebanon, Indiana.
Visitation will be held from 1:00 p.m. until the time of the service.
Interment will follow at Oak Hill Cemetery in Lebanon.