You Are Here:Home>Obituaries>Walter G. Lowery 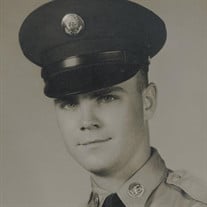 Walter was raised in Montgomery County where he attended school in Alamo, Indiana.

On October 29, 1964, he was united in marriage to Margaret A. (Batts) Lowery in Boone County, Indiana; she survives.

Walter had provided 40 dedicated years with the Lebanon Post Office. He served 28 years as a letter carrier and 12 years in maintenance and as a courier. He was a member of the Mechanicsburg Christian Church and had previously served as a board member of the Browns Wonder Cemetery. Walter was a devoted husband and a skilled craftsman and woodworker.

In addition to his parents, Walter was preceded in death by three brothers, Raymond Lowery, Bill Lowery, and John Lowery; and a sister, Betty Lowery.

Funeral Services are planned for 11:00 a.m. on Monday, March 7, 2022, at Myers Mortuary, 1502 North Lebanon Street, in Lebanon, Indiana. Visitation will be held from 9:00 a.m. until the time of services.
Interment will follow at the Browns Wonder Cemetery in Lebanon.