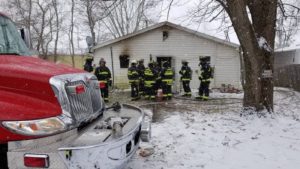 No people were injured in two Boone County fires Sunday. Kasie Arterburn was not home when fire broke out in her house at 706 W. Franklin St., Thorntown. Heavy smoke was coming from all four corners and flames were shooting through a window, although most of the flames were contained to one room and the attic above, Thorntown-Sugar Creek Fire Chief Mike Martin said.

In a second incident, a passing motorist called in a fire at Jeff and Sherri Randle’s pole barn at 2735 N. C.R. 600 W. The barn and contents were a total loss, but no other structures were damaged, Advance Fire Chief Jim Caldwell said. More details at reporter.net.