You Are Here:Home>RadioMom Local News>West Lafayette Man Arrested After Pursuit 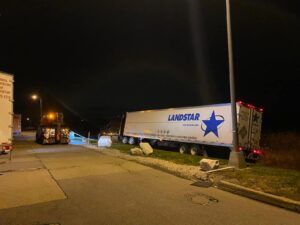 Just after midnight Saturday night, Indiana State Police Radio Region 1 Dispatch received a 9-1-1 call that a semi-truck struck two vehicles and left the scene of a crash on State Road 25 near County Road 900 East. Trooper Fike located a 2017 Freightliner driven by Jonathan Cain, 33, West Lafayette, at State Road 25 and Interstate 65. Trooper Fike activated his emergency lights and attempted to stop the Freightliner as it was getting onto Interstate 65 southbound from State Road 25.
Trooper Fike pursued the Freightliner southbound on Interstate 65, where Cain avoided multiple sets of tire deflation devices before striking one at the 158 mile-marker. The pursuit continued to the 148 mile-marker, where the Freightliner exited Interstate 65 into the rest park and went off the road. Troopers on scene safely took Cain into custody. Cain showed signs of impairment and failed the field sobriety test. Further investigation revealed he had a blood alcohol content of .095%. After notifying the semi-truck company, troopers received information that Cain had stolen the Freightliner and the trailer. Cain was transported to Tippecanoe County Jail.