Whitestown, Ind. – It’s a plan that has been years in the making, and on Monday, June 17th, town officials and law enforcement personnel gathered to officially break ground on the new Whitestown Metropolitan Police Department Headquarters.

The new $3.1 million headquarters will be 21,735 square feet housed in a two-story building. The first story will be finished immediately, with plans to build out the second floor as the need arises to accommodate future growth. The headquarters is being built on six-acres of land already owned by the Town of Whitestown at 6208 Veterans Drive, where the Whitestown Municipal Complex is located. 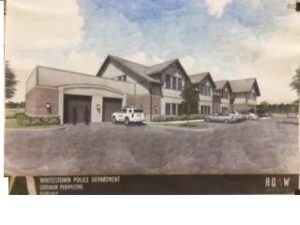 Currently, the growing police department is operating out of a small, cramped wing inside the Whitestown Municipal Complex. The small hallway has just four offices, no training areas, and inadequate room for evidence storage.

“Honestly, we are bursting at the seams and outgrew that space years ago,” explains Chief Public Safety Officer Dennis Anderson. “We are beyond thrilled to have this opportunity to move into a state-of-the-art headquarters with the space we need for our current public safety needs, and room to grow in the future as our department, and our town, continue to boom.” 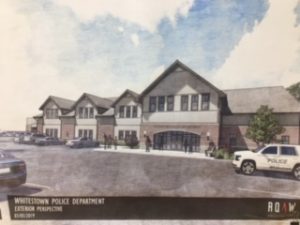 Whitestown is the fastest-growing community in the state of Indiana for the 8th year in a row, according estimates recently released by the U.S. Census Bureau and analyzed by the Indiana Business Research Center at Indiana University’s Kelley School of Business. The town’s population nearly tripled between 2010 and 2018, and the growth is expected to continue for several more years to come. That tremendous growth has required the fire and police departments to grow to keep up. W.M.P.D. hired four new officers in 2019, with plans to keep growing in the future as the town’s population continues to increase.

The standalone police headquarters includes space for a detective division, a computer forensic lab, a training room and fitness facilities, as well as a holding cell. There will also be room for a traffic court. “Currently, there’s no room for department-wide training or monthly traffic court,” says Anderson. “We’ve had to borrow space at the town hall for both. It will be nice to have dedicated space for these important functions.”

The Whitestown Metropolitan Police Department hopes to move into its new space by the fall of 2020.