You Are Here:Home>Obituaries>Wilbur E. French 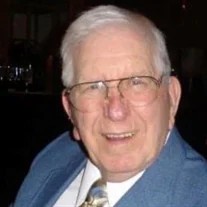 Wilbur E. French, 95, passed away peacefully and surrounded by family at St. Vincent Hospital on Sunday, December 6, 2020. He was a loving father, husband, grandfather and great-grandfather. Wilbur was born in Lebanon, IN, on August 6, 1925, to Floyd and Minnie French. He married Sue Spear in 1946 and had two children, Clifton Douglas French and Dennis C. French. Sue preceded him in death on February 16, 1990. In 1993, Wilbur married Lollie Oakley. She preceded him in death on June 8, 2007.

While Wilbur was mainly a loan officer during his working years, he was most proud of his military service. He served in the U.S. Army during WWII in the 65th Infantry division. He fought in France, Germany and Austria with Paton’s 3rd Army.

Wilbur was involved in nearly every club, lodge and service group in town. He was a Life Member and former commander of VFW Post 910. He was a Life Member of the American Legion and the Elks. He was a member of the Boone County Shrine Club, the Murat Shrine Club of Indianapolis, the Scottish Rite of Indianapolis, Mason Lodge #9 and 40 & 8. He was the oldest member of the Eagles Lodge Aerie 2062 and was the last surviving charter member of the Lebanon Kiwanis Club. In his free time, he enjoyed playing golf, bowling, playing cards and taking fishing trips to Canada.

Funeral Services will be held at 10:00 a.m. on Friday, December 11, 2020 at the funeral home in Lebanon. Interment with military rites will follow services at Oak Hill Cemetery in Lebanon, Indiana.

In lieu of flowers, memorials may be given to the Boone County Cancer Society
117 West Elm Street, Lebanon, Indiana 46052, The Sunshine Society sunshinesocialclub.org, P.O. Box 199, Whitestown IN 46075 or to the charity of the donor’s choice.