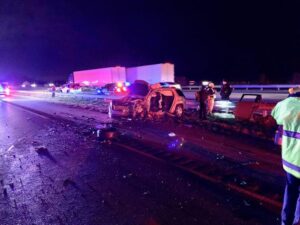 On Monday 12-14-2020 at approximately 06:53 PM, Lebanon Police responded to a wrong way driver heading south in the north bound lanes on I-65 from the 138 mm. After the initial dispatch, Officers were told there was a head on crash between two vehicles at the 136.2 mm. Bill Rainwater 83, of Indianapolis, IN was traveling the wrong way on I-65 in a GMC Terrain. While traveling south in the northbound lanes, Mr. Rainwater’s vehicle struck a Saturn Ion head on driven by Nicole Watson 22, of Greenfield, IN. Ms. Watson was pronounced deceased on scene by Boone County Coroner’s Office.  The Boone County F.A.C.T. (Fatal Alcohol Crash Team) was notified and an investigation is still ongoing.